Couple gnarly slabs of vinyl and tape flew in through the front door this week, and they're all releases from some garage rock faves and some new finds.

***NOTE: I have no idea why there are a few large gaps between some of these posts. Anyone have any clue why this is? It looks fine in the preview but comes out weird when I publish. HELP!*** 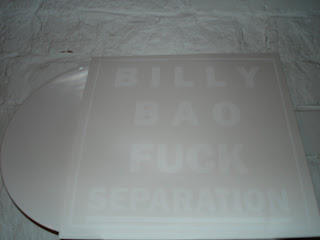 Billy Bao fled from Nigeria, landed in Bilboa (Basque Spain) and employed thnastiest punk rock drummer and guitarists he could get his hands on. Since then Billy Bao has released a few 7"s, a full length on Parts Unknown (came out earlier this year) and this 10" of 2 punishing tracks. Actually, this pretty much acts as one long track that features that exact same riff pummeled over the listener's head for almost 20 minutes. This is very reminiscent of the endurance test that was the Cadaver In Drag full length, which I enjoyed immensely last year.
White silk screened cover on a thick, white card stock all on white vinyl. Perfectly captures the white-hot rage of the music within. A man on a serious mission. You better pay attention. 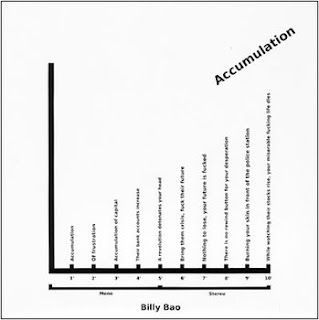 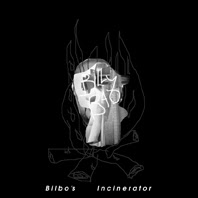 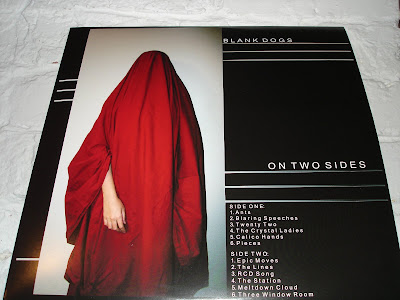 Spun this one a couple times at work before giving it a home. It took a few listens to really nail this one, but once you do, it sticks like hot gum in yr hair. Kind of reminds me of those Devo demos that Eno heard before he went down to Ohio to produce the shit out of them. Also brings to mind just about any of the 80s DIY groups featured on the impeccable Messthetics label, which all makes sense once you check out the band's blog. It seems as if at least one member of the band has an obsession with seeking out little known DIY groups from the 80s and ripping them to their blog. The influences are riding pretty high on their sleeves, but no particular group is overtly sticking out. Every time this got played in the store, everyone had their own opinion of what it sounded like. My ears hear early Flying Nun, the astral pop of John Maus and the bouncy end of Joy Division. It's great to hear groups pick up on this side of the 1980s rather than the god-awful electro/disco end of the spectrum, which has permeated dance music for years now.

This was originally released as a tape on the excellent Woodsist/Fuck It Tapes label.

The band has saved me the time and uploaded the album to their blog. Get it HERE

In addition, here are links to downloads of their early 7"s. 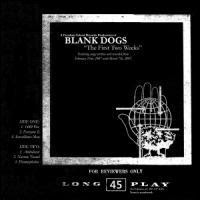 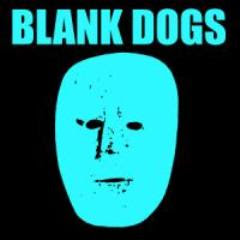 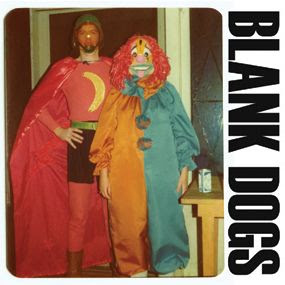 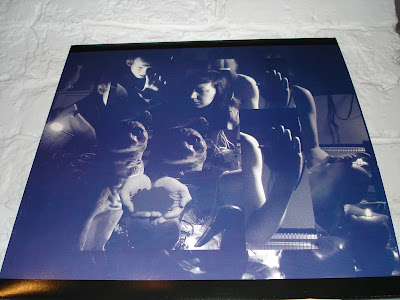 Hard one to pin-down from this newest release by Siltbreeze. This is a duo from Australia that conjure up some hypno-darkness with a dirty organ, untuned drum and a busted up, creeky bass . I managed to catch these folks play at Pub 340 a month ago and the live show was fantastic. Short, sharp stabs of synth, lumbering bass and Lucy Phelan's "doom poetry" (she played both Organ and drum) made for a particularly haunting night. Listening to the record comes close to the dark psychedelia of that night. 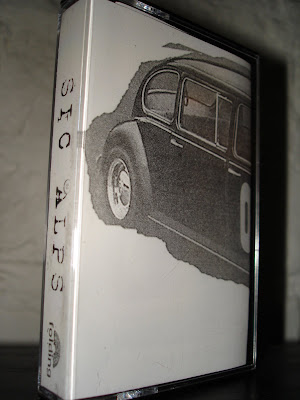 Managed to scoop up two of these from AQ before they all got snagged, and i'm glad I did because I just watched this fucker get flipped on ebay for $20. Funny thing is, it looks like you can still get copies from the Folding website. Anyways, these four songs were recorded live at WFMU late last year. These are mostly songs that have been issued in some form or another in the last two years and show the band in fine form. The tracks are pretty muddy for the most part but they do show the band's unique garage-pop sensibilities that have had critics and fans wagging their tongues for the last year and a half. Nab one quick before they be gone!

Since I don't have the capabilities to put my tapes into mp3 files (yet!), I have uploaded a copy of their OOP LP Description of the Harbor for your listening pleasure.Also, Animal Disguise is re-issuing all of their early tapes, 7"s and the Harbor LP in one convenient CD. This will be limited to 1000 copies. Act fast. 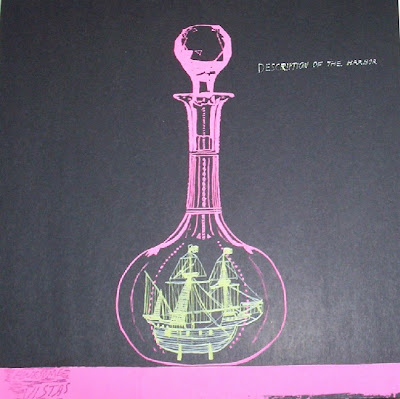 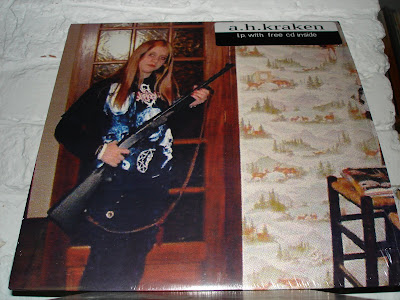 French garagesters unleash some sloppy but catchy tunage on their debut for In The Red. Pretty typical group for ITR--barely audible vocals (all in French!), manic and fuzzy guitar work, and all of it underproduced for maximum cochlea scraping. Gotta love the cover with what looks like the little sister of a band member, wearing a Slipknot t-shirt and holding a rifle. How very, uh, French! 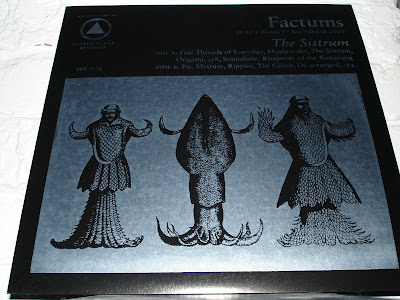 Next up is the newest full length from Factums, whom you remember from my 2007 best of list, right? This beast is much subtler than it's aggro, slashed speaker predecessor. In fact, you probably wouldn't be able to guess that this was ever the same band. Blown out guitars and heavily distorted vocals have been replaced by hypnotic, trebly guitar lines and barely there vocals. Most of the record actually reminds me of the quieter moments of early Chrome. There is also an accompanying seven inch--first side, first track is more of that entrancing guitar with manipulated vocals. The second track is a 60 second punker more reminiscent of their earlier work. The second side of the 7" is the best track in the whole package. A short, surfy guitar line with some garbled and aggressive vocals laid out over top. It's good to see that these kids can still get aggressive when they want to. Great package on this one, folks. Silk-screened cover, bonus 7" and two creepy lock grooves at the end of both sides of the LP. You can nab this fucker here and here. 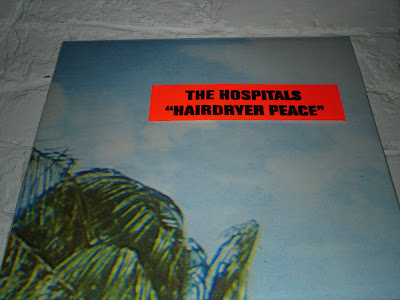 Now we have the newest full length by a personal favorite in the over-the-top garage rock category, The Hospitals. I was expecting a bit of the same ol' with this new one. You know, screaming, violent vocals, neanderthal drum beats, spastic riffs all topped off with some feedback drenched production. Not this time. Ok, the hissy production is there, but the boys are going for a larger approach. Full on psychedelic passages sit side-by-side with some syrupy riffage and hammering, meaty drum beats. The album sold out within weeks from their website but you may be able to get a copy from some of the fine distributors listed at the bottom of this here blog. Easily the best thing these kids have ever put to wax.

I'll let Scott Simmons describe this for you in better, grittier detail...

"Doesn't really matter whether you loved or hated The Hospitals before, cuz this is some year zero shit. This is the most psychedelic fucking record in a long time and there are no rainbows - no feather earrings - no beards. Mixed for maximum hallucinations, it has the stoned riffs of a killer rock record, totally cracked pop, pure headfuck, but more than anything else just an all around perfect album. It's Chief Hospital Adam Stonehouse with oringal Hospital co-founder/shredder Rod Meyer and Rob Enbom from Eat Skull and Chris Gunn from an island off the coast of the future. Sounds nothing like any bands or anything else.. Seriously, if a better record comes out this year, next year, whenever.... I promise. Edition of 500. Don't be an asshole." - Scott Simmons

Yikes! Just looked this up on ebay in the completed listings and it just changed hands for $50 US. Luckily, ya'll can get it free here.

That's it for now. Music Waste picks tomorrow!
Posted by Mark E. Rich at 11:12 AM

Blank Dogs is actually just one guy, Mike Sniper, who was in a band called DC Snipers (their 2006 record Missle Sunset is great) and is also (I believe) behind Radio Heartbeat records. I find the Blank Dogs stuff to be wildly variant in quality, but the best stuff is amazing. I like the First Two Weeks EP and Yellow Mice Sleep single the best. I can't quite get into On Two Sides yet. I doesn't have the raw craziness of his best work. It's kind of like he made the 76-81 punk to post-punk/new wave jump over the course of less than a year. I hear a lot of Gary Newman and early OMD in the full-length. Still, his stuff is very intriguing, and I knew you'd dig it.

Factums I can't get into. Too art school, especially when compared to the blistering fuzz of the Intelligence and the Cramps-y fuck rock of the A Frames.

The other stuff I haven't heard... yet.

You should check out FNU Ronnies. One of the best noise/garage acts around, and their single Meat is high on my list of the year's best.

i've tried downloading this album several times and it won't work. maybe it's just been too long since you posted it.

but still, fuck you

maybe you should considering upgrading your piece of shit computer. You know, maybe get one that doesn't have a green and black screen or a floppy disc drive. Just a thought

Several files wouldn't download for me either. Maybe you should check the directories of the shit you upload and then check the 'Hidden Files' section to make sure you aren't uploading any unnecessary shit that WinZip doesn't like.

Anyway, A.H Kraken is great. What is it with the French these days? Have you heard Cheveu?

Naked on the Vague are pretty boring. Not every band has to sound like Sonic Youth y'know.

Billy Bao was kind of interesting but mostly straight up noise rock. Good for a cursory listen and not much more. In fact, calling most of this stuff "garage rock" is kind of stretching it. I'd say it's mostly noise rock with a touch of avant punk, not really "garage" per se.

Have you heard the new Human Eye single? You'd probably dig it. Also, check out Cheap Time, if you know what's good for ya.

Damn. I wonder why those files won't work. Do they download fine? What happens when you try to unzip/unrar them? Help me out. I'm not too sure what this hidden files thing that you mentioned is about.

The French are back on top. Just wait 'til I post about Soggy! Yah, I have listened to that Cheveu full length and it is pretty awesome. S-S can do no wrong.

Not every band has to sound like Sonic Youth but it sure helps.

Ok, calling everything garage was a bit of a stretch but I did feel there was a unifying theme between most of these bands. I would imagine that if one person was into one of these bands then they would probably be able to get into any of the others.

Still waiting for the Cheap Time LP to come into work. Have big hopes for it. As for the Human Eye, I will have to see if i can download it from somewhere.

Most of the Hospitals songs were considered "corrupted" by Win RAR.

I believe that there's a "scan for viruses" thing that you can use with the programe. I'm not the best person to ask since I've only used it for unpacking things and not compressing anything for upload.

To check your folders go Tools-Folder Options-View then under "Advanced Settings" there's a setting for hidden files.