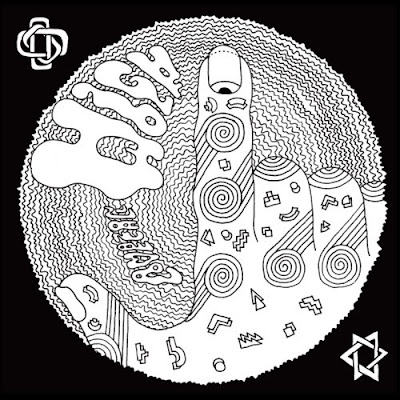 DOWNLOAD EPISODE 93 here (right click link, then Save As)
Posted by Mark E. Rich at 1:48 PM No comments: 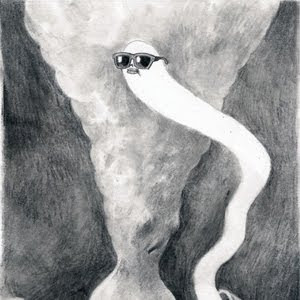 Jaw dropping new cassette by San Francisco's Peter Berends as KWJAZ, just issued as the first release on Brunch Groupe, run by Joe Knight from Rangers. Two side-long tracks that ooze from one piece to the next, morphing from cosmic lounge music to slowed down cool jazz loops to warbled alien-like bossa nova excursions, all of it stitched together seamlessly across the cassette's forty-five minute run time. Initial batch of just over 100 copies sold out pretty fast, though Not Not Fun will be stepping up and putting it to wax sometime in the summer. 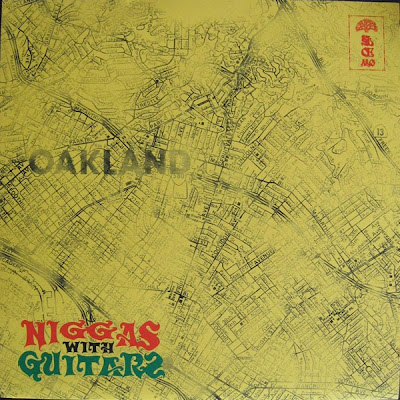 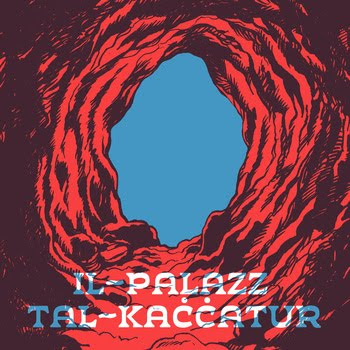 Ooooh boy, received a doozy of a surprise this week with the self released ten inch by London/Brussels shadow dwellers, Hunter's Palace. A few weeks had gone by after the band had solicited a promo of their debut, so unwrapping the record last week was met with head scratching after trying to read the words on the front of it. Out slipped the promo sheet with a write up that muddied things even further. Apparently the band's name was translated to Maltese for the cover, then the sheet went on to inform me of strange laws in Malta. No description of the band, well, outside of "formed in 2003, disbanded in 2014". Well, proof's in the puddin', so they say. Side A,"Tal-Metall", begins with a disorienting guitar line that reminded me of later period Don Caballero, before the song eventually erupts into well-timed guitar howls and smoked out riffs. Meanwhile, the vocalist is singing in a language I cannot place. Maltese? Eventually it all settles down, though some great tension is created by some whirling electronics and eerie guitars. Soon the riffs are back and the vocals grow urgent this time, yet still indiscernible. The song fades out and soon it's over. What just happened there? No easy reference points here so I bring the needle back to the beginning. Again. And again. I guess it sounds a bit like a thuggish offshoot of one of the many bands from Metz, France (think of a more monlothic Anals or A.H. Kraken...maybe). That's the best I got. The flip is a lot more chaotic but very controlled and calculated. More yelping in Maltese coupled with a beefy wall of feedbacking guitars, droning keyboards and cavernous guitars. Intense listening to say the least. Easily one of my favorite releases so far this year, and it blindsided me, as so many great records do. I highly recommend you grab this one direct from the source because it doesn't seem like too many shops or distros will be picking up on this anytime soon.

Also just watched this video for Tal-Metall, which hasn't really cleared much up.
*note: not for the squeamish 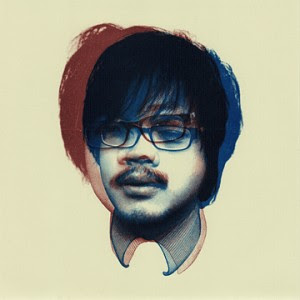 After creating some of the harshest noise assaults under his Burning Star Core moniker, CS Yeh steps out from behind his violin and processed electronics for a shot at pop. The A side, "In The Blink Of An Eye", starts out with an early 00's bass thump (think early DFA singles) and is followed by some obtuse and muted guitar work. Then his voice (noise fans will have heard this only in the form of Yoko Ono-like vocal workouts) jumps in. Doubled up, we first hear a flat and almost unemotional voice, a bit reminiscent of Jim O'Rourke's, and is coupled with a backup that awkwardly tries to hit the higher notes. May not sound that appealing on paper but it balances out quite well alongside the upbeat music, all of which grows in sonic density as the song progresses. It's all pretty head scratching at first but much like his more experimental work, it grows on you. The flip is a piano-led ballad that is a bit more stark and haunting than the A. Both songs are expertly produced and reveal a side of the musician that I'm sure most would never have even thought possible. Hopefully this is just a taste of things to come from. Great packaging on this too; silkscreened covers on nice textured paper. Sure to be out of print soon. Snatch it here.

DOWNLOAD EPISODE 89 here (right click link, then Save As)
*episode MIA, should be up later this week
Posted by Mark E. Rich at 5:50 PM No comments: