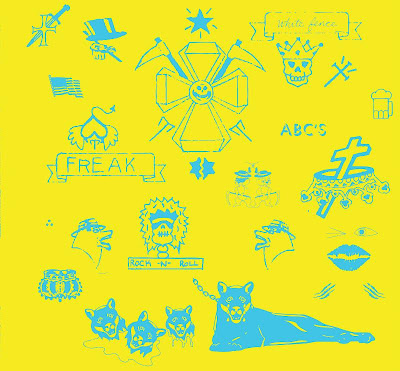 In the meantime, get a hold of that White Fence LP. 2010 contender. 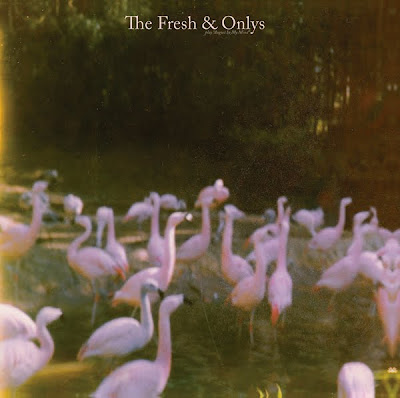 Not a ton of time for reviews this week, so we're sticking to the essentials...

Two brand new ones this week from Pop Drones faves The Fresh & Onlys. The twelve inch on Captured Tracks is the band in fine pop form, while their one-sided seven inch on the Hell Yes! label is a much darker affair. Not sure why Hell Yes! released a one-sided seven inch for these guys, especially considering the vast amount they've released since their inception. You figure they coulda come up with another track. Kind of expensive once the euro and shipping is involved, so I can only recommend this to the die-hard fan. The F&O's have another seven inch due soon on another small-run European label, Plastic Spoon Records, based out of France. Pre-order that here. Of course, the long awaited LP on In The Red is due soon, as well. Vancouver fans can catch them with King Khan at Venue on April 11th. 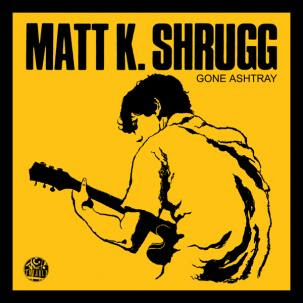 Though it's not out for a few weeks, Matt K. Shrugg's new LP on Tic Tac Totally is shaping up to be one of those great summer records that stick with you until the bitter cold of winter arrives. Buncha new tracks dropped on his myspace, so if you've been following this cat's seven inches for the last few years, this full platter full o' amped up garage anthems is gonna hit the right spot. 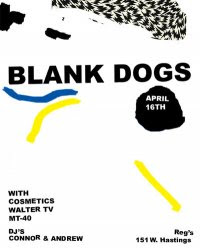 In case you haven't heard yet, Blank Dogs is making his first appearance in Vancouver this coming Friday. I got a pair of tickets to give away on the show this Wednesday (the 14th), so tune in between 10am-113oam for yr chance. Gonna be a must-see show. 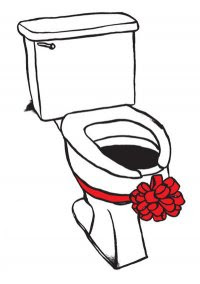 A note for all the Vancouver bands who are still looking to play Music Waste this year. Deadline for entries is April 15th, so get yr shit together and send some basic info here

Still looking for volunteers for this as well. Email the above to help put on Vancouver's best fest. 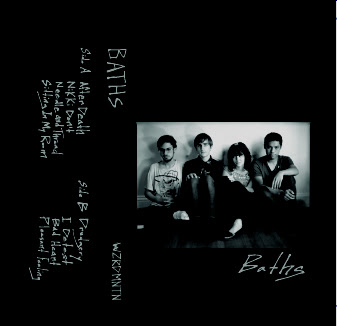 Thanks to the always vigilant ear of DJ Rick over at Art For Spastics, I was recently hipped to another great band from the San Fran area--Baths. Darkly woven psych-garage that's sure to impress some fans of like-minded bands from that scene (think the Fresh and Onlys' somber moments), though they certainly stand tall on their own legs. Sure enough, after Rick urged someone to press these guys to large-format wax, Woodsist has announced they'll be putting out an LP later this year, and Hozac will be releasing a seven inch, too. For now you can grab a self-titled cassette from Wizard Mountain, but I bet we can expect some of these tracks to appear on the forthcoming LP. Also, the band have a seven inch available on the hard-to-track-down Rad Key Records label. 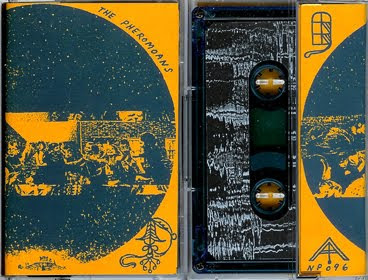 Night People has been busier than ever, releasing over a dozen of cassettes over the last few months, not to mention the outstanding Broken Water LP. The Pheromoans follow up two well received seven inches with a tape of hissy, ramshackle DIY punk songs that sound like they fell off a Messthetics compilation. Definitely not as "polished" as the songs heard on those previous seven inches, but well worth the investigation nonetheless. Keep an ear out for an EP on Sweet Rot, and lathe cut split seven inch with Dan Melchior on Scotch Tapes and their debut LP on Convulsive. 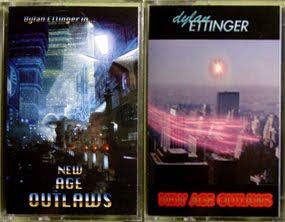 Despite releasing a lot more vinyl than ever before, LA's Not Not Fun still have time for new cassettes, with two new notables by Dylan Ettinger and Edibles. Ettinger, who runs the El Tule label, had an earlier cassingle and seven inch on NNF and half a dozen cassettes on various labels, releases his most cohesive and streamlined effort yet. New Age Outlaws is a slow build of vintage synths that eventually mold into a laidback cruise through cities previously envisioned in William Gibson novels. There have been a long line of releases like this from Ettinger but this is easily his magnum opus and apparently his last statement in this style of futuristic soundtracking. 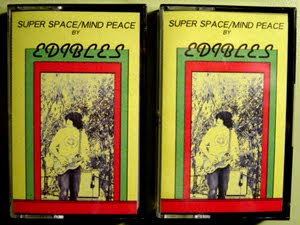 If Dylan Ettinger is in cruise control in the clouds of a fictional future city, then Edibles (aka Dewey Mahood of Eternal Tapestry and Plankton Wat) is drifting down a hazy, sun-speckled river of content. Crazy-echoed guitars slither around deep bass hits and pitter pattering bongs, evoking a stoned reggae seance far from urban annoyances. Definitely not what you'd expect to hear from the shredding guitarist who's best known for throwing down with heavy psych juggernauts Eternal Tapestry. Highly recommended, especially for fans of Ducktails or the lighter, reggae-tinged side of Sun Araw. 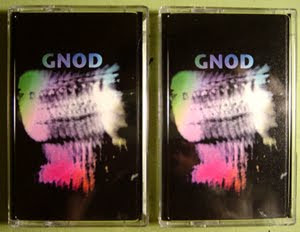 One last cassette to mention here is the recent Gnod release on NNF. Gnod have been slaying the UK with their intense bouts of hammering psych for several years now, meanwhile, they've released a few cassettes (most sold out) on psych-minded labels like Sonic Meditations and Sloow, not to mention a few self-released CDRs. Now Not Not Fun have managed to wrangle them in for two side-long blasts that'll blow yr scalp off by the end of each side. Look out for a 2LP release with White Hills due next month on Rocket Recordings.
This is probably the type of band that really needs to be seen live, so check the youtube clip below for an apporoximation... 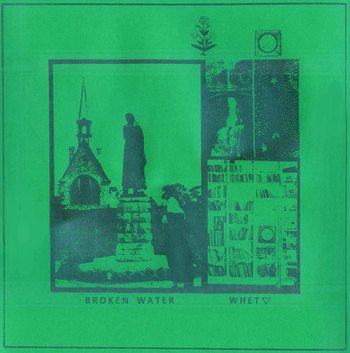 Tons of great new music this week, including an out-of-nowhere surprise by a new band from Olympia called Broken Water. They had one under-the-radar self-released seven inch to their name, so this new LP on Night People is sure to garner them more attention. The band consists of two ex-members of Sisters and a member from Congratulations, both of which now seem to be defunct. This three piece continue the current trend of late80s/early 90s revivalism, with easy comparisons to Sonic Youth, Unwound, Eric's Trip, and Dinosaur Jr. Much like their forbearers, they manage to flit easily between the grinding noisy end of guitar rock and the woozier, atmospheric side. The comparisons to SY and Dino will probably follow these guys for some time because Jon Hanna's vocals are tapped into the laid back drawl of J. Mascis and the snotty cool of Thurston Moore. I don't really want to spend too much time dissecting the record-- the proof is in the puddin'. This one's a contender for favorite of the year so far. Seek it out asap! 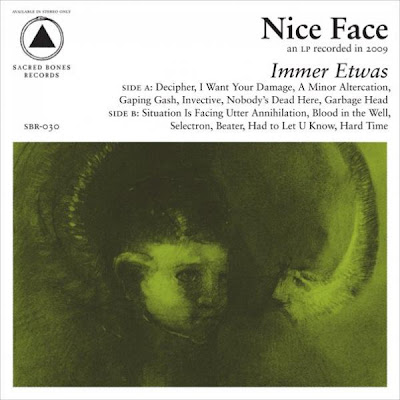 After two years of teasing us with seven inches, NYC's Nice Face finally release their debut LP. Thirteen tracks of noisy and electro-damaged synth punk that's sure to whet the appetite of fans of bands like Feeling Of Love, Amber Alerts, Dead Luke, and Blank Dogs first year, though the singer has a distinct sneering vocal style that helps separate them from the rest of the pack. Immer Etwas, unlike the quick stabs of the seven inches, flip the switch on and off between the alarmist synth punk we've come to know and anthemic fuzzy punk rock that would've fit in well with the late 70s punk heard in NYC. Essential listening for '10. 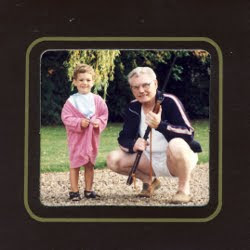 Italy's Avant! Records caught my attention about a year back with the release of a seven inch by Mexico's Los Llamarada, which, alongside their excellent LP on S-S, received a ton of play at the homestead. Avant! has recently released a brand new from one of Metz's finest, Feeling Of Love, who already had a packed few months with a single on Sweet Rot and an LP on Kill Shaman. This single's A side is "Waiting for the cheerleaders to get drunk" and contains some real creepo lyrics about lurking under bleachers waiting for, well, you get the idea. A hypnotic strum 'n' bleep that is easily the most restrained and cleaned up I've heard the band. On the flip they take some classic Zombies lyrics and give 'em the FOL treatment. Avant! has just recently snatched up another winner from France and released an LP by Cccandy. Look out for the in a future episode... 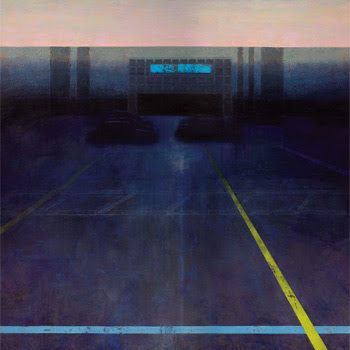 Excellent new batch from Olde English Spelling Bee, who have been on a bit of hypnagogic roll the last few months. OESB has a keen ear for releasing vinyl for groups that would normally disappear into the cassette underground. In fact, Rangers and Forest Sword both had their start releasing limited cassettes. Rangers traverse the same territory as their previous Not Not Fun tape, which has been dubbed as "mirroball funknagogic pop". Basically it's a much more upbeat version of the cheese-infused soundtracks created by Skaters, Lamborghini Crystal etc. 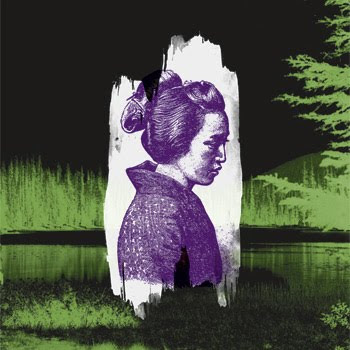 Forest Swords has two previous cassette releases on Woven Tones and Leftist Nautical Antiques, and Dagger Paths features revamped tracks from both, so if you missed those tapes, now's yr chance. Stuck in the middle of northern England, Forest Swords creates hallucinatory dubscapes by apparently using the coastline as inspiration (interview on that here). Languid guitar lines on repeat alongside dubbed 'n' screwed bass with the occasional vocal sample slipped in, riding somewhere between the warmth of Burial and the shamanic simplicity of Pocahaunted. Highly recommended and limited to 500... 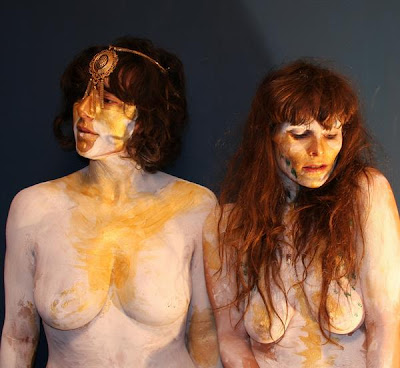 **sorry, having some issues with this week`s podcast. Check back in a few days...
DOWNLOAD EPISODE 43 here (right click link, then Save As)
Passing along some upcoming local shows, including a rare appearance by Mecca Normal at Fake Jazz on the 14th...
SUNDAY APRIL 4th:
BLEEDER, FORCED LAUGHTER, STAMINA MANTIS
ALF HAUS
WED APRIL 7th:
BLEEDER + FUCK NO! tour kickoff show with HARI LEGS and PHONECALLS
THE ASTORIA
5 BUCKS
10PM