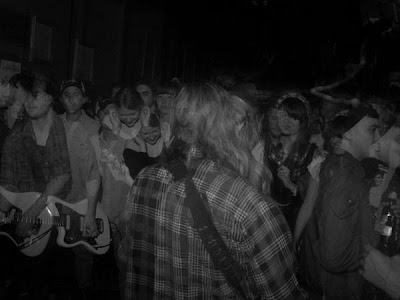 Couple of previews from some upcoming records, including the Dum Dum Girls LP, Woven Bones debut full length on Hozac and Indian Jewelry's 4th LP on We Are Free. First up is the DDG record, which I've had the opportunity to preview over the last month and I definitely foresee that it's bound to elicit some naysaying criticisms from those who were "there first, man". Yup, the sound is definitely cleaned up compared to those early lo-fi tracks that had over eager bloggers wetting themselves (myself included) early in 2009. But, if anything, the songs here are allowed to breath a little with the improved production, proving that Dee Dee doesn't need to hide behind a wall of fuzz to mask any shortcomings. Apparently, Vancouver will get their first opportunity to see the DDG at Venue (worst "new" venue in the city?) with Girls (don't even get me started), but their myspace says they'll be in Europe. Confirmation anyone? 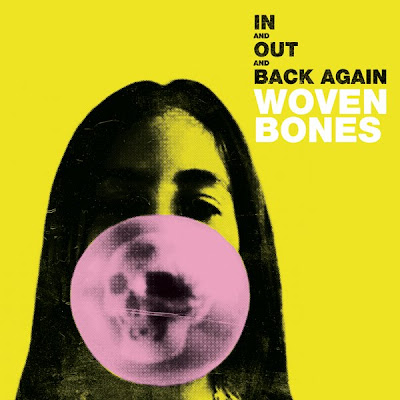 It's still a couple months away, but I'm pretty juiced up for the Woven Bones LP on Hozac. The tinny MP3's I received will never do this record justice. No surprises here for those that've been following their spat of excellent seven inches over the last year, there's just more music to go through. The one exception on the record is album opener Blind Conscience (played in this episode), which is played at a quarter of their typical speed. The rest of the record rips out the gate in their normal white-knuckle, leather jacket cool. The LP is still a ways off, due May 28, but I'll be sure to play a few more tracks leading up to the release date. 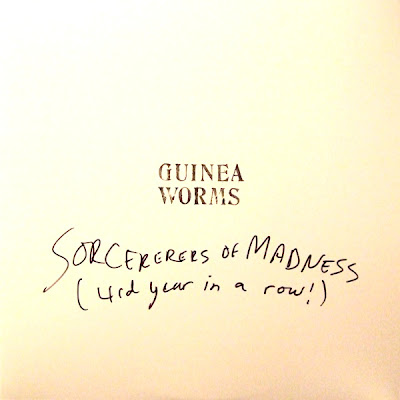 After more than ten years and a handful of seven inches and CDRs, Columbus Ohio's Guinea Worms release their debut LP, and they made it well worth the wait with two LPs worth of unreleased material, which was apparently culled from over 12 CDRs worth of music. Of course, when you consider that Sorcererers is drawn from ten years worth of music, you end up with a mixed bag, revealing an almost schizophrenic band. And, like the range in topic and tempo, the genres seamlessly hopped across here flow from stumbling country bar band to overt Fall homage and back to barely-holding it together punk rock. Fans of Country Teasers-style rockinroll revisionism is urged to grab a copy asap (1st press already done but a second is on the way...) 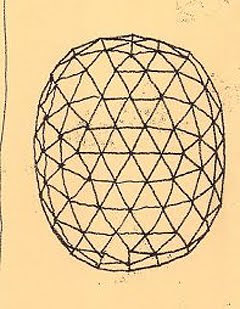 Peaking Lights release their first piece of music since the much-loved Imaginary Falcons LP on Night People, and this time it's in cassette form on the recently re-ignited Fuck It Tapes label. If you were hoping for more of the Cluster/Eno and dub-inflected ambience, then you might be a bit caught off guard by Space Primitives. This one-sided cassette has a bit of everything; amped up and fried junk-boogie that makes their lo-fi LP sound downright professional, and super hissy grooves via beat up drum machine, complete with squealing guitars/FX and dank synth drops. These guys are all over the map on this release and remain impossible to pigeonhole.
Disgustingly limited to 100 copies and sold out within days, so try Fusetron or Scoop it here.
**update** this is to be reissued this year on 12" by Night People, so save your ebay funds for soemthin' else. 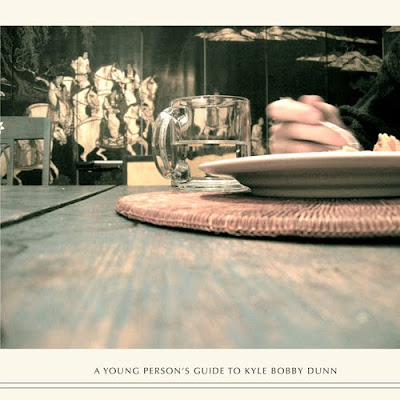 For over five years Kyle Bobby Dunn has been quietly releasing some of the best modern ambient music on labels that are, sadly, barely a blip on anyone's radar. This trend should, however, be remedied with this 2CD release on the higher profile Low Point label, collecting two hours worth of material recorded by KBD and co over the last five years. Twelve tracks of subtle and soothing ambience that definitely reminds me of the pre-orchestral days of Stars Of The Lid. Most of the tracks have a slow build, usually beginning with low-flying tones that are soon engulfed by subtle drones and lightly bubbling electronics. Perhaps my favorite piece from the entire set is a solo piano track that nears the end of the second disc, which is a heartbreaking work of melancholy. Fans of ambient music are highly recommended to seek this out. 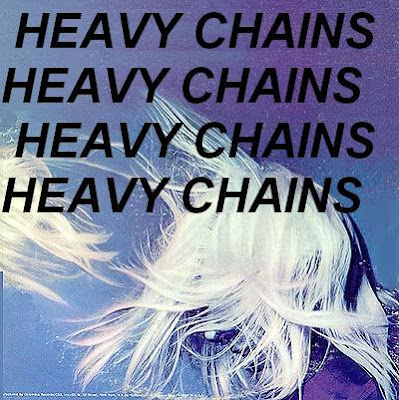 Though there is no physical release as of yet, Vancouver's Heavy Chains (pictured at the top of the post) sent some MP3s my way of some recent recordings. The band features Andrea of Nu Sensae, Brody of Mutators and Anne Marie of White Lung, so you know they're probably coming up with something brutish. And brutish we get. The few songs I've heard so far are an intense mix of Brainbombs-style grooves and slashy metal/punk guitars, all topped off with what sounds like distant vocals run through half a dozen pedals, or are those just some noise generators? Well, you can find out for yourself out on the first night of the Fake Jazz Fest, March 24th at Lick. Speaking of that... 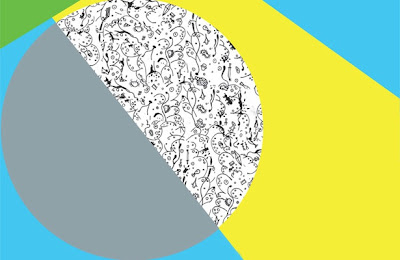 In case you haven't heard yet, Fake Jazz is having its first ever festival starting this Wednesday and heading through right to Sunday. Local favorites THE RITA (performing his Snorkel piece while submerged in a wading pool), Aerosol Constellations, V. Vecker (debuting a Branca-esque guitar symphony!), Josh Rose (aka Sick Buildings), Magneticring, Empress, and tons more play across several venues, including Lick, the Secret Location and The Western Front. Full passes are a mere $25 or you can pay to get into each individually. Details below.... 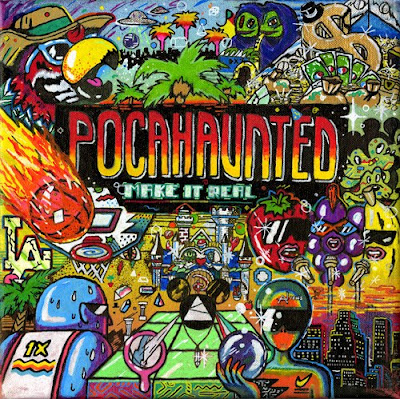 Pocahaunted has done a major line-up change over the last year and It's Real showcases the band revamping their sound almost completely. Cameron Stallones (aka Sun Araw) has joined the band and added his sun-dappled touch, and they've also added Britt Brown (Robedoor/NNF headmaster), Diva Dompe (Blackblack), M. Geddes Gengras (who also produced the LP), and, of course, Phaunt's mainstay Amanda Brown. Anyone who has been paying attention to the few live tracks that've leaked since the rebirth back in 2009 will notice them in a new and cleaned up form. If you haven't checked out the new lineup and maybe weren't a fan to begin with, then now might be the time to re-investigate. Pocahaunted now spew a mighty funk-laden and groove heavy rhythm, complete with actual lyrics. That's right, long gone are the days of the hypnotic chant'n'drone. Fans of Sun Araw and his otherworldly reggae riddims will have plenty to eat up. One of 2010's early highlights. 500 pressed on LP and sure to be gone soon... 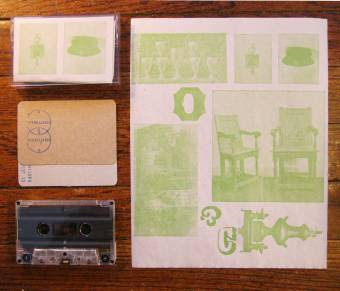 Goaty Tapes has just dropped a nice batch of sonic intrigue and, as usual, the packaging on these cassettes is top notch. First up is Columbus Ohio's El Jesus De Magico who are quick to follow up on last year's excellent LP on Columbus Discount. If you were diggin' the basement scuzz and deranged motorik garage moves of that full length, then this here cassette will be a nice follow up. Two separate editions of 100 that'll surely be gone in a flash. 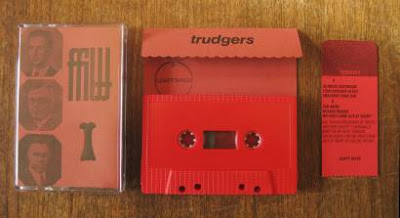 Trudgers hails from Murrieta, California and this tape on Goaty appears to be one of several recent releases (cassette already released on the up and coming Hi Shadow). This appears to be a one man affair and he covers the same goth-y/industrial soundscapes as Cold Cave (the early years) and Blessure Grave. Hell, there are even some Flux Information Sciences moments here (check the track played in this episode) .With a deep baritone and a backing of industrial tics, plodding bass and an assortment of warped synths, Trudgers is a fitting addition to the recent wave of neo-goth musicians. 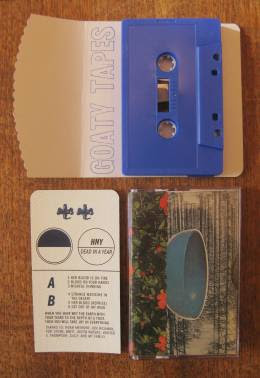 I've been championing HNY on this blog for some time and her newest cassette on Goaty is more cause for spreading the faith. This is fairly distanced from the more mystical and lighter affair that earlier had me drawing comparisons to Grouper. The vocals are usually clear and raw rather than shrouded in delay and grey effects, though some creepy layering is used to flesh everything out. Ominous drum machines and metallic scrapes and stabs commingle together to create an (occasionally) horrifying soundtrack. Nice to see HNY has some flex in her. Excited to hear the next left turn... 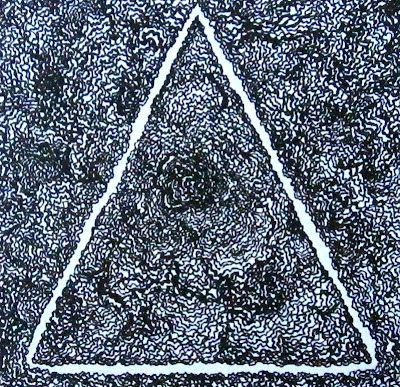 Higuma is the duo of Evan Caminiti of Barn Owl and his musical associate Lisa McGee, who have previously released a CDR on the Root Strata label. And, much like their first release, this new LP on Digitalis is painfully limited. Sadly, you'll have to seek this one out on ebay or an MP3 blog to get a hold of this, as this sucker was out of print within a week. Anyways, fans of the desert-y folk side of Barn Owl will be primed for this release. 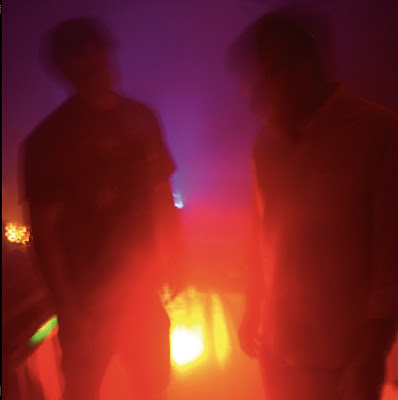 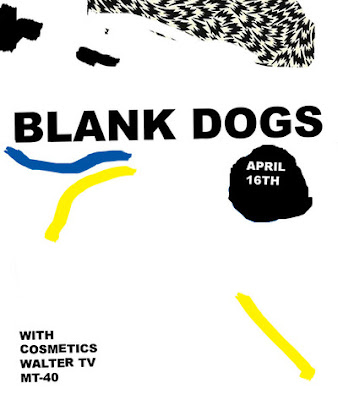 Holy shit, Captured Tracks! Slow down for a minute. My wallet has been takin' a severe hammering for the past few weeks, as they quickly unveil each new batch of releases, and this here new one is the best they've delivered in this young year. CT's infatuation with the UK continues, with top notch releases by Wetdog (post-punkin' in the vein of Raincoats, Slits etc), Veronica Falls (lovely pop with a nice bent angle...PS where's the single for the much beloved Beachy Head?) and Dignan Porch, who have an LP to be released on the label soon. CT has also cast some love to our own neck of the woods by releasing the first Cosemtics seven inch, with another coming soon. Cosmetics will also be playing with Blank Dogs in a loft/living space somewhere along West Hastings on April 16th. Details forthcoming. CT also has a new twelve inch by ETMS faves The Fresh and Onlys due soon... 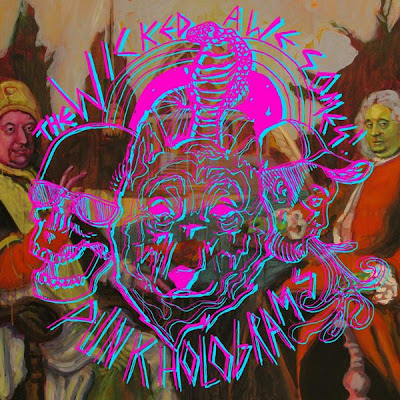 Edmonton's Wicked Awesomes have escaped my grasp since their inception, but a copy of their LP on Psychic Handshake was sent my way and the ears have finally been opened. Not sure what is going on in Alberta but there has been a serious renaissance in their punk/fucked-up-rockinroll department for the last year or so. Bands like The Famines, Moby Dicks, Grown Ups, Sharp Ends, and Myelin Sheaths have been steadily releasing seven inches and cassettes on local labels and even some higher profile labels like Hozac in Chicago and Bachelor in Germany. Wicked Awesomes are actually the perfect archetype for the weird waves emanating from our neighbor province. Punk Holograms is a slapdash rave up of demented punk suitable for those who still think the genre is dead. Weird Canada summed it up best-- "It's a beautiful pawnshop display case of wastoid punk. Highly recommended stuff. Grab it here. For more Albertan flailing head to the Honey Lounge this Thursday, March 11th for the Grown Ups. 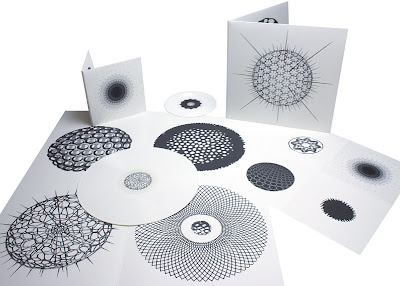 Though I've raved about it in the recent past, I'd like to spread one last bit of love for the AFCGT LP. As I mentioned before, the album only comes in LP format and is limited to 550 copies. The best part is it comes with a bonus seven inch that has what is easily the most interesting piece I've heard from them. Korin is a 4 minute industrial-funk workout that totally stands out from the rest of the muscular sound record. Well worth the price alone. Plus, this package is one of the best I've seen in recent memory. Four panel fold-outs for the LP and the bonus seven inch! Check that shit out.
Posted by Mark E. Rich at 3:04 PM 2 comments: