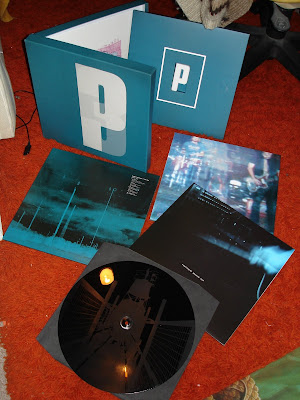 Came home Monday night to find my Portishead deluxe edition of Third waiting at my doorstep. The album arrived last week at the shop and we have been playing it in the store everyday, sometimes twice a day since then. The album officially came out Tuesday but I was surprised to see the deluxe edition, which I ordered almost 2 months ago, waiting for me one day before the official street date. Sure, Third has been crawling all over the internet in full/free downloadable form for months but it's great to finally have the final hard copy in my hands and on my turntable. I actually avoided downloading it and decided to wait for street date or the arrival of it at the store whichever came first. I felt it was worth waiting for, and I didn't want to get sick of it before the album had even officialy been released, which seems to happen quite often these days with modern consumers of music. After seeing the final package of this I don't know how anyone can simply be happy with some piddly mp3's on their computer, or even the lackluster jewel cased CD version, of which there is nothing special besides the great album that resides within, of course. Maybe that is just enough for most people now-- a great album no matter the format. Not enough for me, I say. Sure, I shelled out almost $80 (30 pounds plus 10 pounds shipping) for this months ago, and it contains all the same music that you get from downloading it for free or buying the CD, but I hold the tangible product that the band wanted to release. The reviews slowly pouring out are revealing (and the pre-street date downloaders have already revealed) that Third is fulfilling on the hype and ten year wait. The packaging on the deluxe version will help seal this record's soon-to-be monumental status. Most of you have already heard the album and don't need a track by track rundown, this entry is merely to bask in the glory of a great package lost in world of invisible mp3s.

The fine details: Everything is housed in an inch and half thick faux-vinyl box with the P3 logo on the front. Immediately upon opening the box is the USB (shaped in the Portishead logo, natch) set into a thick card stock. Beneath the USB station is the record, which is about 45 minutes long and is split across 2 12" LP's with no more than 3 songs per side. The vinyl is heavyweight (feels more then 180g) and both LP's are housed in thick picture sleeves that have close-up photos that appear to be from the Machine Gun video. The flip side of the sleeve are black and blue negatives of housing surrounded by cranes and antennas. Foreboding, yet cooling, imagery that fits most of Third's vibe. Also included is a 12" single of Machine Gun that has an etching on the back, which can be seen below. There is also a limited print by Nick Uff included, which seems almost tossed in there as an afterthought. The print isn't themed with the rest of the package and kinda sticks out like a sore thumb in an otherwise immaculate package.

Seriously, folks, there are still copies left on their website but probably not for long. When Radiohead did a very similar thing with In Rainbows, they sold out of copies within a month or two and copies now regularly go for $300 on ebay, which is a far cry from the $80 it started out at. Who knows what people will pay in ten years? The same thing will happen with this set since it has aready gained instant classic status. If you love this record and gotta gotta gotta have the packaging, I urge you to take the plunge. It will be well worth it. 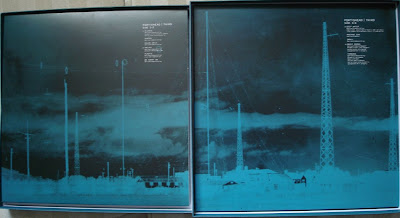 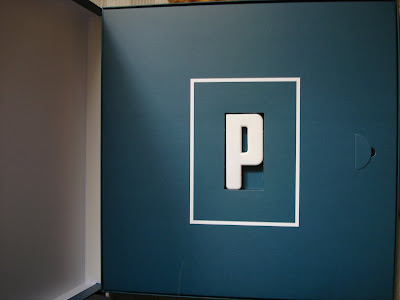 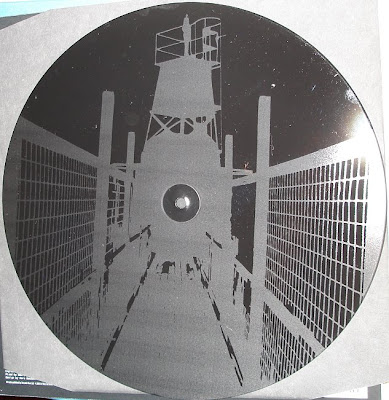